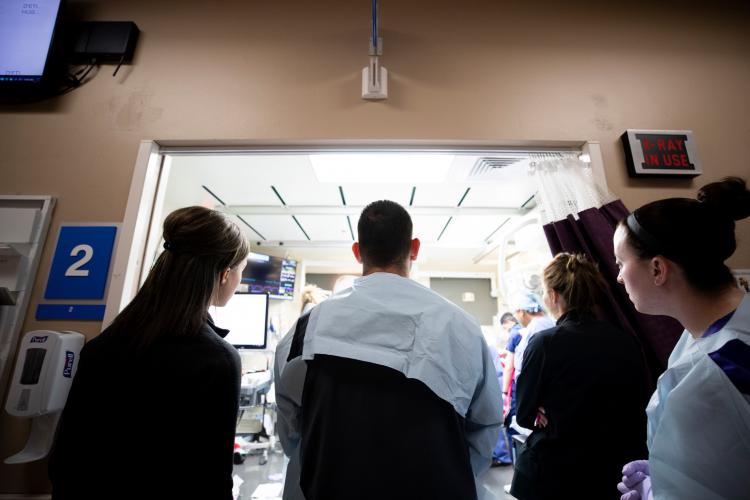 A Saturday shift in June started like any other for Fort Worth Police Department officer Matthew Brazeal.

He’d just confirmed dinner plans with his fiancé Candace Hardin when a call about a high-speed chase outside of his normal patrol area came across the radio. The officer responded that he was ready to help if needed and, when the dispatcher accepted the offer, Brazeal headed to a highway location on the west side of town where he planned to wait for suspect to come his way before making his move.

“I was going to wait by the side of the road and throw spike strips out in front of him to puncture his tires and force him to stop,” Brazeal said. “But when he saw me there along the shoulder, he just turned and headed straight towards me.”

Traveling in excess of 70 mph, the suspect struck Brazeal with the small sport utility vehicle he was driving, dragging him through the ditch before the officer’s gun belt finally broke, leaving him lying beside the road. Brazeal’s body was broken so badly that his left ankle was resting next to his left ear. The suspect fled the scene but was captured a short time later.

“I don’t remember any of it, which is probably a good thing,” Brazeal said, relying on police reports and accounts from fellow officers to piece together everything between the text about dinner and waking up in a hospital bed days later. “The people at the scene told me they thought I was dead until I started screaming.”

Trauma surgeon Dr. Carlos Rodriguez said, despite his loss of memory, Brazeal was not only conscious when he arrived at the JPS Health Network Level I Trauma Center, he was composed enough to pass on some medical information to those taking care of him.

“There were a lot of injuries. But we kept moving forward, never finding anything that made me afraid we couldn’t fix it. It was just going to take a lot of time.”

Rodriguez examined Brazeal’s body, assessing the injuries he found, and formulating a plan to save the officer’s life. Meanwhile, the officer’s fiancee was enjoying a day off and was still dressed in her pajamas when neighbor, also a police officer, knocked at her door.

As she realized the gravity of her neighbor’s words, Hardin crumpled to the ground in tears, not sure if the man she planned to marry was alive or dead.

Brazeal’s pelvis was broken into three pieces. One of his arms was crushed so badly that when Rodriguez asked him to move it, the elbow moved several inches while the shoulder stayed still. The officer was bleeding so much that he received three units of blood before he got to the hospital. He was rushed right into surgery upon arrival.

“You’re always concerned about what you’re going to find, hoping there’s not something you’re not going to be able to fix,” said Rodriguez, a veteran military surgeon who gained immeasurable experience putting back together bodies broken on the battlefields of Afghanistan. “There were a lot of injuries. But we kept moving forward, never finding anything that made me afraid we couldn’t fix it. It was just going to take a lot of time.”

Rodriguez credited Brazeal’s intense physical fitness plan with helping to save the officer’s life, holding his body together despite all the trauma.

Hardin said the hours Brazeal spent in surgery seemed to take forever as she and his family waited for word. When Rodriguez came out, he was guardedly optimistic.

“As soon as Dr. Rodriguez started to talk I could tell he was the right person for the job,” Hardin said. “He seemed so knowledgeable and confident. I knew if anyone could save (Brazeal’s) life, he was the one to do it.”

Just four months after the day he nearly lost his life, Brazeal is walking on his own again. Nearly as incredible as his survival, he’s preparing for the day when he can rejoin the police department.

“I was in the military, then I’ve been in police work,” Brazeal said. “That’s the best way I know how to give something back. If there is any way I was going to be able to get back to doing it, I knew that’s what I was going to do. I don’t see anything at this point that’s going to stop me.”