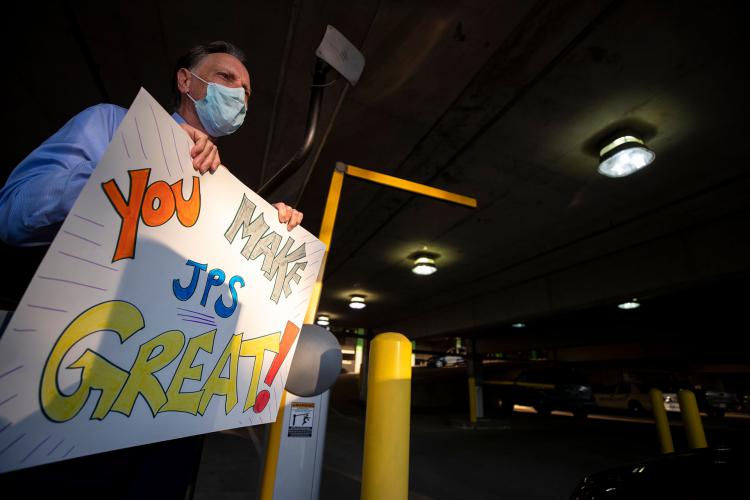 After 13 years leading a public health system now nationally recognized for its care and service to its community, Robert Earley is retiring as president and CEO of JPS Health Network. Earley shared the news with his staff via video message on Tuesday. His retirement comes with the network positioned to affect significant, taxpayer-supported improvements to healthcare delivery in the county, and Earley says all the hard work that brought JPS to this moment has taught him a few things.

“Life and work still boil down to three simple rules: owning the role you have to play, seeking joy in your work, and not being a jerk to the people around you. That code of conduct, embraced by 7,200 team members, has allowed us to do great things at JPS,” said Earley.

The list of accomplishments during his tenure is long. Earley became interim president and CEO in 2008, and the JPS Board of Managers named him to the role permanently nine months later. Since then, the health network has seen tremendous growth in both the number of patients it serves and the services it provides. JPS has won praise for its many accreditations and highest levels of care, including Level I Trauma, Stroke, Sepsis, Delirium, and AMI, among other certifications.

In the middle of the pandemic, JPS was recognized by Washington Monthly magazine and Lown Institute as the Best Hospital for America, topping rankings for its service to the community, civic engagement and teaching programs. This follows a string of high-profile call-outs as a best place to work and an Outstanding Health System by Modern Healthcare, Dallas Morning News and D CEO Magazine.

All that fame and attention doesn’t seem to go to Earley’s head.

“At JPS, we’re not here for the praise, though it is certainly appreciated and keeps us going on our darkest days. We are here to serve. Whether you’re a nurse, a radiologist, a med surg clerk, a food services worker or the president and CEO, you sign up with JPS for a higher calling,” Earley said. “All 7,200 team members come to work every day to help someone else. And our patients know it because they feel it as soon as they arrive. We are here to help our community.”

“What Robert has done at JPS is extraordinary.

That dedication to public service is a thread in Earley’s professional life. At age 23, he became the youngest person to serve at that time in the Texas State Legislature. He has taught at universities, spoken to what seems like every civic group in Tarrant County, and is regularly called on by national and international organizations to explain how he led the JPS team in a culture transformation that resulted in improved patient care and outcomes.

“What Robert has done at JPS is extraordinary. To take a culture and turn it around so people find their passion is no easy task,” said Lara Burnside, SVP and Chief Experience Officer. “He created an environment where our team found pride in the organization, which led us to become one of the best places for employees to work, physicians to practice, and patients to receive care.”

Dr. Jay Haynes, MD, senior medical director of innovation and integration for the physician group Acclaim, has known Earley since he started at JPS. “He is mission driven, has tremendous energy, and leads with a passionate commitment to improving the lives of our patients, our healthcare workers, and our employees,” said Haynes. “He genuinely shares our concerns and challenges, and actively celebrates our wins and accomplishments…his positive impact will continue to last for decades to come.”

Such sentiments about Earley are common throughout JPS.

“He is not only one of the best leaders, but one of the best men I have had the pleasure to work beside. Robert has always been the real deal,” said Angie Morgan, who many years ago served as Earley’s executive assistant. Morgan is now the Director of Design and Construction for the network, and has led the work on influential projects throughout Tarrant County on behalf of JPS.

Future projects to improve healthcare in Tarrant County will be supported by the landslide bond referendum passed by voters before the pandemic. It’s a testament to the strength of the historic institution that will now carry on without its charismatic leader.

In his retirement announcement, Earley expressed his deep appreciation to all those who supported and worked alongside him at JPS. The JPS Board of Managers is expected to launch a national search for his replacement immediately. Earley will stay on as president and CEO through March.