Sanders, Wong Wrap up More than 80 Years of Work at JPS 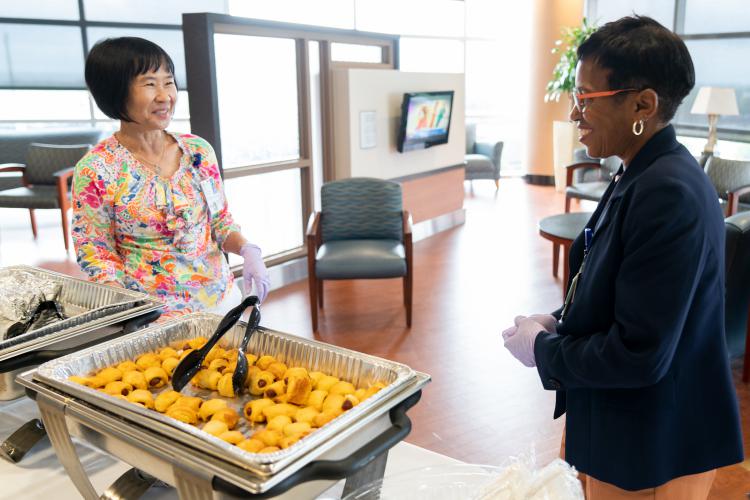 A pair of veteran nurses will take more than 80 years of experience with them as they walk out the doors of JPS and into well-deserved retirement.

It’s a bittersweet time for Trudy Sanders, Vice President of Patient Care Services, and Lily Wong, Director of Nursing Support Services, as they leave behind jobs they love, colleagues they’ve worked alongside for decades to help build JPS into what it is today, and countless team members they've helped to develop to lead the health network into the future.

“Trudy Sanders and Lily Wong will be missed not only because they’re people we’ve counted on every day for four decades, but because they embody the JPS spirit,” said President and CEO Robert Earley. “While it’s difficult to say goodbye, we’re grateful that they’ve made this place so much better than how they found it, raising the bar for the people who will follow them.”

“Trudy and Lily have both been instrumental and critical parts of JPS,” Peebles said. “It will be a major loss with both of them leaving. I can’t imagine this organization without Trudy. I don’t think we’re going to truly know all of what she did until she’s gone for a little while. She had her hand in so many things without bringing attention to herself. We may fill the job, but we’ll never be able to replace Trudy Sanders.

Peebles said Wong was always willing to lend a hand wherever she was needed, and she had the respect of her peers and protégés because of it.

“Lily has been such an advocate for our nurses, and so supportive to me personally and professionally,” Peebles said. “When she had an assignment, you never had to worry that it was going to be done. She had the historical perspective to remind us who we are and where we came from, as well as the nursing background to get us where we were going. That knowledge base is going to be something we’ll really miss.”

It's about helping people grow.

But both nurses turned executives said they’re confident the health network and its patients are in extremely capable hands – and that they wouldn’t leave if they didn’t believe that. They’re looking forward to passing the torch to the next generation of leaders.

“When I started, I was in my early 20s and I had a nurse I worked with who was 35,” Wong remembered. “I thought that was so old back then. I couldn’t imagine still being in the same place I was when I got to be her age. But I found my job to be very rewarding, and feeling like I made a difference in people’s lives made me change my mind and realize I was the place I was supposed to be.”

Sanders, who plans to retire at a yet-to-be determined time in the near future, has worked at JPS since 1977 – if you don’t count the part time work she did as a student the year before. Wong, whose last day was July 31, began her career at the health network in 1981.

While it took Wong a little while to figure out JPS was the place for her, it took Sanders exactly one day.

“The summer before I was supposed to graduate, another student and I were going to go down to work at a hospital in Houston with plans to see what that was like,” Sanders said. “We went to some apartments where it was recommended we could live, and it was horrible. The traffic was horrible, too, plus it was so hot. We knew right away it wasn’t for us. We drove down to Houston and came back home that same day. I think my mother was in shock when she heard the door open and saw me standing there. But it was not meant to be. I’m sure glad things worked out the way they did.”

Sanders, who is from the Fort Worth area, said JPS was a natural fit for her. She was eager to work in the Intensive Care Unit where she could learn all kinds of things as quickly as possible. Her appetite to learn served Sanders well, soon she was asked to help train her colleagues on new equipment as it arrived, her first step up the ladder of growth.

“People ask me sometimes if I regret that I only worked at one place and didn’t try anything else,” Sanders said. “I always tell them, I’ve had lots of different jobs, they’ve just all been at JPS.”

Wong started across the JPS campus from Sanders, working as a nurse in Behavioral Health.

Wong became Nursing Director in Behavioral Health in 1993 and her presence became an integral part of the department.

“I started about the same time as Trinity Springs opened so I always tell people I came with the building,” Wong said. “I’m sort of the butler, I know every inch of that place: where everything is and how everything in the place works.”

In 2010, Wong moved to Community Health where she became the administrative director of nursing for a year and a half. But she went back to working inpatient services a year later as Director of Nursing Support Services where she finished out her career.

“When I started, I never thought I would end up staying 39 years,” Wong said. “But I never left because it was a really rewarding place to be. Working in Psych is really a challenge. Every day we had something new and every year we grew. I’m grateful to have worked with some wonderful staff.”

Wong said she’s spent a lot of time over the past decade thinking about the future after she left JPS.

“Working here is about taking care of patients,” Wong said. “But to do our job to the best of our ability, we have to work on building relationships and helping each other grow. I had a person I looked up to who told me we look to our mentors to show us the good things we need to do and that we should share those things with others. But sometimes we also learn the wrong things to do from them, and we need to keep those things to ourselves.”

Sanders said she isn’t yet sure what she plans to do with her retirement, other than to have more time for her twin passions: running and biking and as well as spending more time in support of organizations like the Campfire Girls.

“It’s going to be different, but I am open to the next chapter,” Sanders said. “When you come someplace for almost 43 years, it’s going to be a big change. I like being in the halls and saying hello to people here. That’s what I’ll miss most.”

Wong said she’s looking forward to hanging her dress clothes in the closet for good and spending her time in jeans and T-shirts.

“My husband told me that I’ve given my time and my brain power to JPS for nearly 40 years,” Wong said. “Now, he says, I belong to him.”