“This is Now Truly a Pandemic of the Unvaccinated” 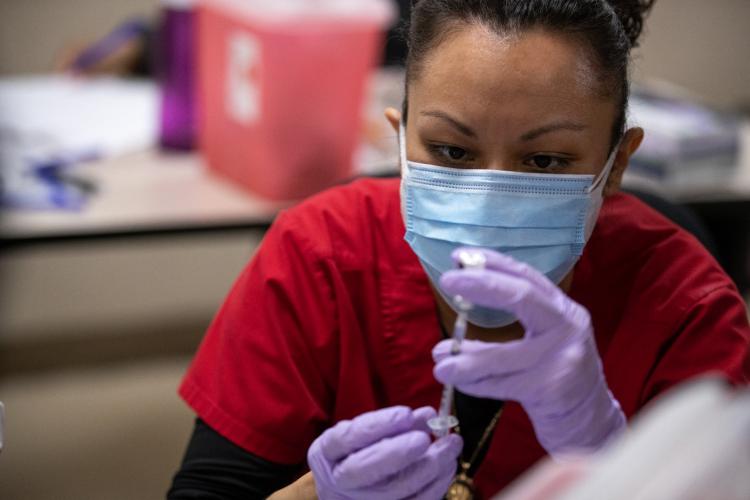 The number of COVID patients hospitalized at JPS Health Network has increased to 13 times what it was at the end of June as the latest surge of cases takes hold, a rise from eight to 105.

Doctors say almost all of the new patients have one thing in common: They haven’t been vaccinated.

Several physicians who take care of COVID positive cases at JPS said they knew of only one fully inoculated patient who was hospitalized – and that person had other serious health concerns that made them particularly at-risk. One other hospitalized person reportedly had one shot but didn’t return for the second round of their inoculation.

"We’ve learned a lot. But, still, we know there is only so much we can do once a person reaches intensive care. We need to keep them from getting to that point."

The latest COVID surge is now "truly a pandemic of the unvaccinated,” according to Dr. G. Robert Stephenson, Vice President and Chief Quality Officer at JPS. “What’s going on illustrates the need for people who haven’t yet been vaccinated to get that done, and the sooner the better.”

The problem isn’t just that there are more cases. Dr. Steven Q. Davis, pulmonary/critical care physician and Senior Physician Executive of Internal Medicine at JPS said the differences in outcomes for vaccinated and non-vaccinated patients are stark.

“The number of vaccinated patients we have seen in the hospital is very low,” Davis said. “I think one is correct. But I can’t be totally confident. Certainly, it’s in the low single digits. The vaccination can make all the difference between having symptoms similar to an average cold – or in ending up in Intensive Care.”

Critical Care Intensivist Dr. Jocelyn Zee, who works with the sickest patients at the health network, agreed that she is aware of only one fully vaccinated person – who is also a cancer patient – who had to be treated in the Intensive Care Unit at JPS. While the number of COVID patients in Intensive Care was down to two in late June, on August 16 it stood at 15.

“Here we are a year and a half into this and it’s just as deadly as it was when it started,” Zee said. “We’ve learned a lot. But, still, we know there is only so much we can do once a person reaches intensive care. We need to keep them from getting to that point.”

Doctors can’t be 100 percent sure about the numbers, according to Davis, because there is no database to keep track of who gets vaccinated. Caregivers have to rely on what patients report to them as they’re admitted. Doctors said it’s unlikely that a person whose condition has deteriorated to the point they required hospitalization would give false information about their health to the people they’re counting on to save their life. But a vaccination database would make records easier to track, doctors said.

While the virus in its previous waves seem to be much more dangerous for older people and those with pre-existing health issues such as diabetes, high blood pressure, and obesity, the Delta Variation doesn’t discriminate. It is equally rough on younger, healthier people. Last week at JPS, two patients in their thirties with no pre-existing chronic health problems lost their lives to the virus.

The uptick in cases isn’t limited to the Fort Worth area. Austin over the weekend declared an emergency situation as its hospitals filled their capacity to handle COVID patients. Meanwhile JPS is receiving calls from leaders at hospitals east of Dallas County looking for empty beds because hospitals there and in between are maxed out with infected patients.

“People need to get their vaccinations if they haven’t already had them,” Davis said. “And they need to get them now. It takes six weeks from the time the get their first shot until their fully protected, and we’re entering the season when people are going to be having the kind of gatherings that caused the virus to spread so widely last year. Back to school has already started. Before you know it, Halloween, then thanksgiving, then Christmas will be here.”

“We need to do the things that will stop COVID – including the vaccinations, masking, and distancing – because as long as this is out there it will continue to mutate,” Davis said. “Variations rarely get better. The next one is likely to be even more dangerous than Delta. We can’t allow that to happen.”