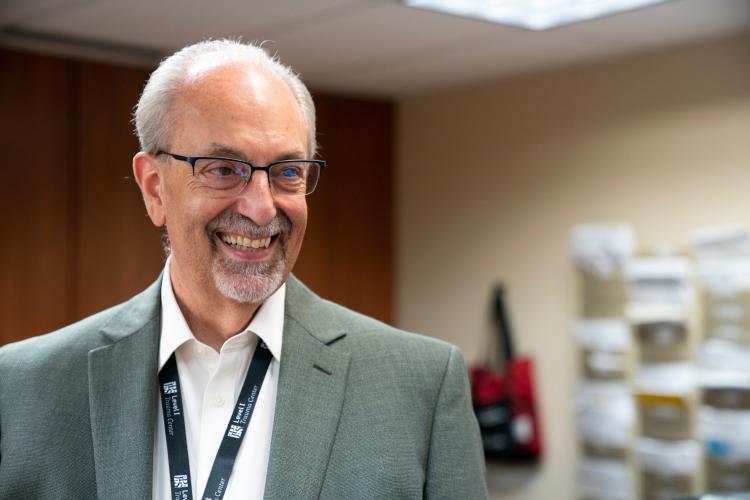 A simple suggestion from a JPS Health Network leader has made the fight against COVID-19 safer for healthcare workers across the country and around the world.

Faced with a unique challenge a few weeks ago, Jim Graves, Executive Director of Respiratory Care at JPS Health Network, received inspiration from an unexpected source: the little Bluetooth speaker that sits on his desk.

“A few weeks ago, we were starting to make plans for isolating patients in negative flow rooms,” Graves said. “We were going to have ventilator patients in those rooms. Because of limited PPE, it was going to be difficult to get in there and make changes to the settings or even monitor what was going on. So we tried to think of another way to do things.”

Graves, who in 2019 was named Manager of the Year in the state of Texas by the Texas Society of Respiratory Care, called the health network’s ventilator supplier, Medtronic. He asked if it was possible to put a long cord between ventilators and their monitor screens so the monitor could be moved outside into the hall.

The respiratory care team at JPS is one of the best I've worked with in my 40 years of healthcare. They put me in a position to ask the right questions because they're so on top of things and so passionate about their work. It's an honor to be a part of this team.

“That didn’t work very well because, while it would allow us to see what was going on with the ventilator inside, it wouldn’t allow us to make any changes,” Graves said. “So we got the idea that we use Bluetooth all the time around here. I have a Bluetooth speaker on my desk that I can play music on wirelessly. What would happen if we tried to connect an iPad to the ventilator using Bluetooth? Then we should be able to monitor and make changes, too.”

Graves called the ventilator company to ask if it was possible to connect to ventilators through Bluetooth.

“They said they didn’t have anything like that, but it was an interesting idea,” Graves said. “I didn’t hear back from them right away, and I figured that was that. But last Wednesday, I received an email that said their engineers came up with something based on that idea -- and that it is already successfully used at Massachusetts General Hospital in Boston and Northwestern University Medical Center in Chicago.”

Tenée Rowan, Critical Care Specialist at Medtronic, said the request from JPS came to her. She forwarded it Gary Milne, Clinical and Technical Director of Ventilation with the company, and he took it directly to engineering. Milne said engineers were quickly able to find a solution, extensively test it and release it for use in only a few days.

“Within about two weeks of the request, we built a software called Omnitool,” Milne explained. “It allows providers to interface with a remote computer. Settings, modes, anything you’d want to view, including alarms, can be done remotely. We’ve had very, very good feedback from hospitals where it’s in use. They report 50 percent fewer trips into the room with COVID-19 patients and 15 minutes less per visit” because respiratory therapists don’t have to dress in personal protective equipment from head to toe to check or adjust ventilators.

While he gets the credit for making the game-changing call to the ventilator manufacturer, Graves said his whole team is responsible for the revolutionary idea.

“The Respiratory Care team at JPS is one of the best I’ve worked with in my 40 years of healthcare,” Graves said. “They put me in a position to ask the right questions because they’re so on top of things and so passionate about their work. It’s an honor to be a part of this team.”