“It Was a Real Game Changer” 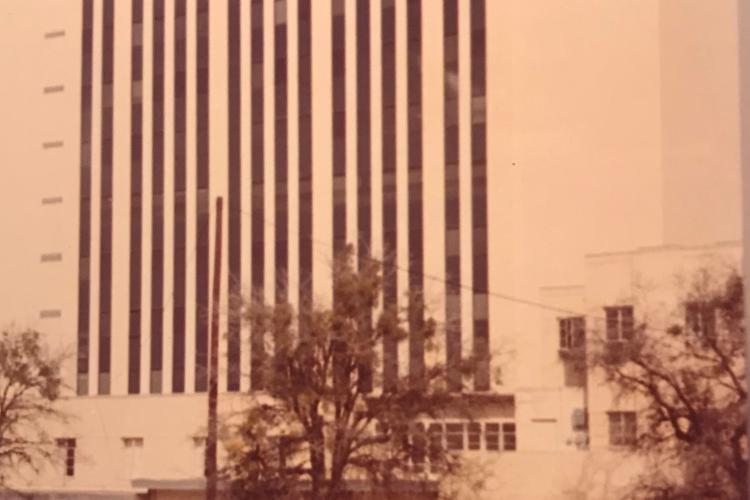 50 Years Ago The Patient Tower Took JPS To Another Level

Today the JPS Patient Tower is a familiar part of the Fort Worth skyline. It’s hard to imagine Main Street without it. But when it was built 50 years ago, the 11-story structure was a real difference maker for team members who staffed it and the patients who counted on the health network for care.

“My second year in training was when they started to build a tower,” said Woody Kagler, who started at JPS in the mid-1960s, working as a lab tech at night while we went to school during the day. “Back in those days, there were too many patients and not enough beds. That old hospital was staffed by people who were like friends, more of a family, really. We were trying to make do with lots of patients and limited resources. But it was a great place to work because of the people we had working there who cared so much about the patients. But we were really trying to be a modern hospital in a 1930s building.”

“The greatest thing about that tower was the additional space that let us do so many things we simply didn’t have the room for before. But I’d say the air conditioning was a close second.”

Kagler became a medical student in 1968 and did his internship and residency at JPS beginning in 1971. He left in 1973 to work in Houston, but he returned in 1978, eventually joining the administration as a senior vice president until 2001.

“It was a real game changer,” Kagler said about watching the new building rise and later working in it. “The greatest thing about that tower was the additional space that let us do so many things we simply didn’t have the room for before. But I’d say the air conditioning was a close second.”

There were only a few private rooms at the old John Peter Smith Hospital, built in 1938. And those were usually reserved for tuberculosis patients who had to be isolated from the rest of the population. Otherwise, there were patient wards that held 16 people on each floor of the old building. Beds were separated only by curtains, making privacy and quiet nearly impossible to find.

“It seems so unacceptable now. But that’s all we knew in those days,” Kagler said. “You just made sure the curtain between the beds was pulled if you had to do a procedure. I think everybody was accepting of it because it was the way care was delivered at that time. There were no medical privacy laws then. It was especially rough in the summer time due to the lack of air conditioning. They told us to be sure patients had plenty of fluids so we didn’t have any heat stroke on the ward. That’s about all we could do to try to prevent it.”

Kagler said he remembers the tower coming on line floor by floor, from the bottom up. While it was miles ahead of the old facilities in terms of modern conveniences and technology, not all of the “upgrades” panned out as hoped.

“All of the rooms and the hallways were carpeted,” Kagler said. “It was supposed to soften the environment and make things quieter. But that was a mistake. You couldn’t keep it clean. They tore that all out not too long after the tower opened.”

Veteran JPS physician Dr. Jay Haynes came to the health network with his father, who was also a doctor, in the 1960s.

“I think the construction of that tower was driven by an architect who had a very specific vision in mind, not by people in the medical profession,” Haynes said. “There were some kinks to work out. But I remember the period when the tower was built and after that as a very exciting time at JPS. It was growing fast and things were always hopping.”

As JPS grew, Haynes said doctors and nurses still counted on help from the private hospital, St. Joseph, across Main Street. He remembered pushing patients across the road on a gurney so they could get a CT scan when JPS didn’t have a machine available to do the job.

“We had a good relationship with the people across the street,” Haynes said. “We used to also like to go over there to eat in their cafeteria, too. They had some pretty good food.”

One popular advantage the tower gave JPS team members was its “Cowboy antenna.”

Back in those days, National Football League rules forbade home games being shown on local television if they weren’t sold out a certain number of days in advance. The tall tower had an antenna on the roof that could pull in television signals from Waco, just beyond the reach of the local blackout restrictions. Patients, nurses, doctors, and other team members were the only people in Fort Worth who could catch a glimpse of the blacked-out games on TV.

The tower wasn’t the only new development happening at JPS in the 1970s and 1980s. In addition to building up, the health network built out, expanding the original building up close to Main Street, adding an Outpatient Clinic on the south end of the structure.

Inside that new space was an upgraded Labor and Delivery area and the Neonatal Intensive Care Unit (NICU).

“Once we expanded, we had a real Pediatrics ward instead of just a few beds,” Kagler said. “We had two delivery rooms before that and the women would wait on gurneys for their turn when they were close to delivery. A lot of babies were born right there on those gurneys.”

Neonatologist Dr. David Nelms arrived at JPS in July of 1970 as the tower was being built. By 1972 the NICU was in business, allowing doctors and nurses to better care for premature babies and ones with other difficulties.

“Suddenly, we had 7-8 operating rooms (compared to four before the tower went into service), and we added a lot of staff including an anesthesiologist and two radiologists,” Nelms said. “We were very busy in those days. Once the expansion happened, we made nice, steady progress in expanding and upgrading our services.”

Nelms estimated that 150,000 babies have been born at JPS during his tenure. He always gets a thrill when he delivers the baby of a new mother who he also delivered. The doctor said he’s eager to see the new JPS facilities in the works as part of the JPS Future Plan program. He said regulations about space have restricted needed upgrades in the current NICU, so a new unit must be built from scratch. He added that expectant mothers expect more privacy and more comfortable accommodations than they did in the past when they seek a place to deliver.

“It’s a good time to grow again,” Nelms said. “JPS took a big step forward when the tower opened 50 years ago. Now it’s time for another step to take us through the next 50 years.”