“He’s Not Going to Die Today” 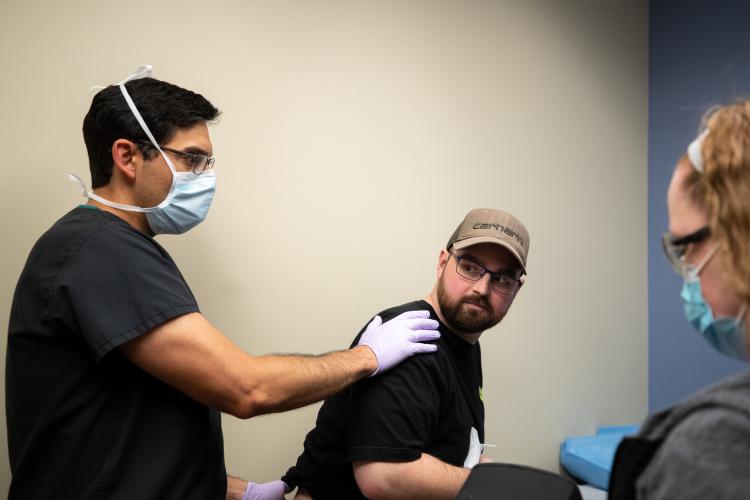 It began like a normal workday for Alex Ramsaier.

In August 2019, he was operating an 8,000-pound rock saw at a quarry in Abilene when, in the blink of an eye, the giant machine suddenly turned over and rolled across the lower part of his body. Ramsaier’s legs and pelvis were crushed in the accident, and he had other significant injuries that caused a massive amount of bleeding.

Rushed to a local hospital, doctors there decided the damage was beyond their capability to repair. So, despite serious concerns that Ramsaier wouldn’t survive the trip, they concluded the patient’s best chance to live would be if they placed him on a helicopter for the 150-mile flight to the Level I Trauma Center at JPS Health Network.

“I remember when I woke up at JPS the next day that a doctor from the other hospital was standing next to my bed,” Ramsaier said. “The first thing he said to me was ‘I can’t believe you’re alive. That’s quite a way to wake up.’”

"They gave me my life back. So it's worth it to make every trip I've taken there over the past couple of years."

RN Rae Hannah-Lyon was in the trauma bay when Alex arrived at JPS. She said caregivers emptied two crash carts full of supplies in effort to stop his bleeding and stabilize him as his family waited in agonizing suspense. While it seemed for a while that they might be losing the battle, Hannah-Lyon said the trauma team simply refused to give up, stopping one source of bleeding, then another, and then another.

“You have to prepare yourself because, as much as you wish you could save them all, sometimes people come through the doors who just can’t be saved,” Hannah-Lyon said. “Although it seemed like the bleeding couldn’t be stopped, no one was going to give up on trying. You just have to focus on the problem that’s in front of you and then move on to the next one. I just kept telling myself, ‘He’s not going to die today.’”

Trauma surgeon Dr. Daniel Ziegler was on duty when Alex arrived at JPS. He said the patient received 17 pints of blood before he was stabilized, nearly twice the total capacity of his body. Still, Ziegler said he never became discouraged about the situation.

“We never think that way,” Ziegler said. “You can’t let yourself believe a patient can’t be saved, even though he more than lost all his blood his body had in it and we had to put it all back. We always believe that we’re going to be successful.”

With surgeons trained in orthopaedics, JPS Health Network doctors are exceptionally skilled in repairing the multiple complicated injuries Ramsaier suffered. They gave him the best chance for a successful recovery.

“When you lose a patient in trauma, it’s either right away or else it’s a couple of weeks later because of complications,” Ziegler said. “You want to make sure you avoid those complications, and we were able to avoid anything we didn’t expect.”

Alex’s mother, Heather Crowder, said it was weeks after the accident before she began to stop fearing for her son’s life. As the threat to his life diminished, concerns that he would be unable to walk and that he may lose his leg to amputation lingered.

“It was tough for a really long time,” Crowder said. “But slowly, little by little, I started to allow myself to feel more confident. I’m so grateful to still have my son.”

In October 2019, two months and a week after he arrived at JPS, Ramsaier was finally able to go home. Although he uses a cane, he can walk again on his own two legs. But it’s been a long journey back to recovery.

At the end of March 2021, Ramsaier had his 35th surgery related to the recovery from his accident, all of them at JPS. He said he’s made the nearly three-hour drive each way because of his deep trust and respect for the doctors and nurses there who have taken care of him and seen him through his journey.

“I’m so grateful for all the doctors and nurses – and everyone else at JPS who helped get me back to this point,” Ramsaier said. “They gave me back my life, so it’s worth it to me to make every trip I’ve taken there over the past couple of years. I can’t thank all the people there who helped me enough.”