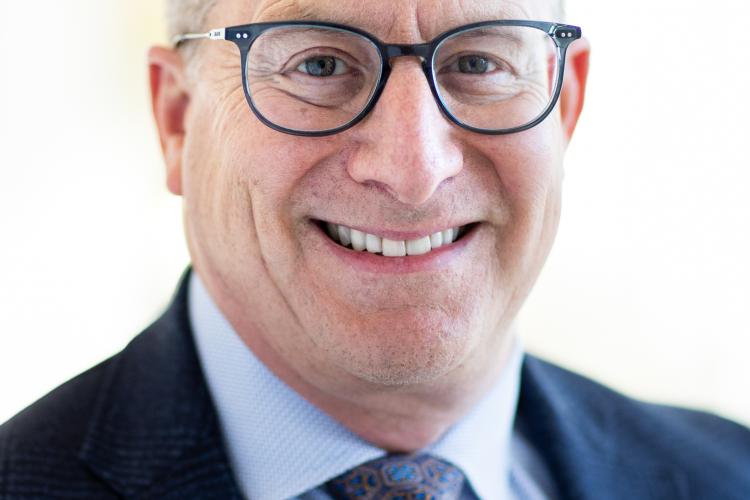 When JPS Health Network leaders approached Dr. Rick Miller about becoming the institution’s Chief Medical Officer, he was intrigued. But he didn’t want to give up his roles as chief of the Surgery Department and as a practicing surgeon for the promotion.

So, he committed to do all three – in addition to serving as the Senior Executive for Surgery at JPS partner Acclaim Physician Group.

Holding down multiple jobs might seem like a lot for one person to put on their plate. But Miller, a former member of the Canadian National Swim Team, used to train for and compete in triathlons as a hobby. For him, taking on one challenge at a time never seems like it’s enough.

“I think I’m well organized and I bring a lot of experience to the situation, so I’m ready,” Miller said. “I’m confident I can handle it all. Besides, I think it’s important for a CMO to be in the trenches every day to see what’s really going on in the hospital. In the long run, being involved in each of these roles will help me do each of those jobs even better.”

"It's really an honor and I am so happy to be here and feel like part of this team."

President and CEO Robert Earley said he’s still thrilled about the fact that last March, JPS was able to lure Miller from Vanderbilt University Medical Center in Nashville, Tennessee. where the doctor had worked for 18 years. Miller’s proposal to handle all three positions was something Earley couldn’t turn down.

“We instantly saw that Dr. Miller was the epitome of what we want at JPS,” Earley said. “He has an incredible heart and mind for care. We were delighted he decided to come here, and we’re delighted that he has agreed to take on a much larger role.”

Likewise, Miller said he is energized for the new responsibility.

“Coming to JPS is something that really made me feel as if I could make the most out of my ability to make a difference,” Miller said. “I want to do everything I can to contribute. That’s what drives me as a person and as a professional.”

While his new titles will carry a lot of extra responsibility, Miller is grateful to have the help of Surgery Department Vice Chairs Dr. Robert Stephenson and Dr. Raj Gandhi, as well as Intensive Care Unit Director Forrest “Dell” Moore.

“Working with Lara is fantastic because she’s so enthusiastic about physician engagement, and she’s already done so much already,” Miller said. “JPS is a place where doctors love to work. We’re going to do everything we can do to build upon that.”

With his career suddenly changing after nearly two decades at Vanderbilt, Miller said he’s thrilled with the way things have worked out.

“To have an opportunity to work at this place with all the talented people here is incredible,” Miller said. “It’s really an honor and I’m so happy to be here, and feel like I can be part of this team, which makes such a difference in this community.”