Dahiya Dialing up Radiosurgery at JPS 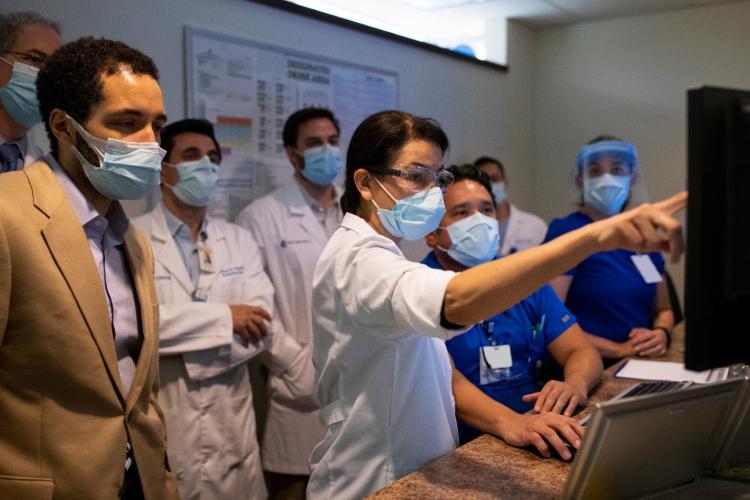 Three years ago, when JPS Health Network decided to purchase a linear accelerator, there was no doubt it was going to be a tremendous benefit for cancer patients.

But who would run it?

The complicated machine, which delivers high doses of radiation to tumors and often eliminates the need for traditional surgery, must be aimed precisely to deliver a devastating blow to cancer cells while leaving surrounding organs and tissue unscathed.

“Dr. Marta Dahiya is the most dedicated radio oncologist I’ve ever met,” Dr. Bassam Ghabach, Medical Director of Oncology and Hematology at JPS, said of the physician who eventually got the job. “She works countless hours in the clinic, staying late all the time to make sure patients are taken care of. I’m so glad we have her.”

"At JPS, we all support each other and we're dedicated to getting the best results possible for the people we care for."

Dahiya works in a small, windowless room tucked deep inside the JPS Oncology and Infusion Center. The building opened two years ago at 1450 Eighth Avenue in Fort Worth, just a few blocks from the main JPS campus. There, she works at a standing desk, plotting treatment plans for patient after patient on two large monitor screens.

“It’s exciting to have a new toy,” Dahiya said of the linear accelerator. “But the real value is that by having this machine we can do a lot of treatments that we would have to send patients other places to get in the past. It’s always better for the continuum of care not to have to do that. You want everyone on the same page when you’re dealing with a complicated case. You get the best results when everyone who helps is under the same umbrella.”

Since, the linear accelerator has been used to deliver about 13,300 radiation treatments, according to Jerilee Robins, Supervisor of Radiation Therapy at JPS. Recently, in addition to being used to perform radiosurgery on brain tumors, attacking spinal tumors has been added to the machines to-do list.

While the approach to confronting spinal tumors is similar to those in the brain, the work is even more precise. According to Dahiya. While it’s relatively easy to immobilize a patient’s head when they’re in the linear accelerator, she said even breathing can cause the spine to move, making the pursuit of tumors there a more unforgiving procedure.

As the caseload at the Oncology and Infusion Center continues to grow, Ghabach said he’s added some part-time help operating the linear accelerator. But he said Dahiya is still doing the work of somewhere between one and a half to two full-time physicians.

Plotting the work of the linear accelerator takes much longer than the treatments. Dahiya said the machine works by beaming low doses of radiation from several different angles at the same time. The individual rays don’t damage the cells they pass through. But, where they meet in the middle, they combine forces to destroy cancer cells. Besides eliminating surgery, the high impact beams generated by the linear accelerator can replace multiple traditional radiation treatment.

Dahiya, who came to JPS in 2015 after relocating to the area from San Antonio, said the health network has been a great place to practice her profession. She came to work on a short-term contract right after she arrived. It didn’t take long before she realized it was the place for her.

“There is a great partnership between the administration and the medical people at JPS, which is very important,” Dahiya said. “It’s important for everyone to be on the same page and support each other, which is what we get here. I think we’re the best because, here, our primary concern is always only what is best for the patient.”

In her sixth year at the health network, the oncologist said she couldn’t imagine working anyplace else.

“I worked in private practice before I came here, so I’ve seen both sides,” Dahiya said. “I really enjoy working on a team. At JPS, we all support each other and we’re dedicated to getting the best results possible for the people we care for.”