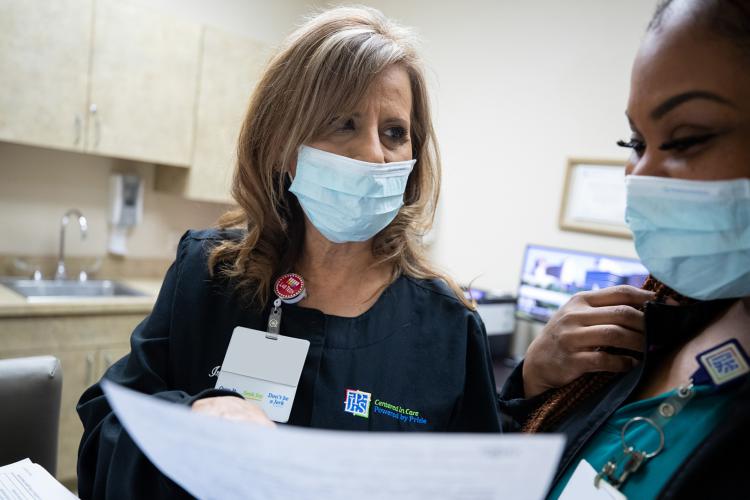 Hearing the words, “your son will not make it to 18,” is never easy, but it was a harsh reality for Irene Riojas, a Medical Assistant at the Health Center for Women. At four months, Riojas’ only child began to experience Petit Mal seizures that would cause the muscles in his body to stiffen and his eyes to glaze over. As his condition worsened, he began to have Grand Mal seizures which caused unconsciousness and aggressive muscle contractions. At just 8 years old, Riojas’ son was experiencing 97 seizures a day. It eventually caused him to suffer a stroke that left his left side completely paralyzed.

He was diagnosed with MELAS Syndrome (Mitochondrial encephalomyopathy, lactic acidosis, and stroke-like episodes), a fatal, incurable disease. MELAS is a rare disease that affects the nervous system and muscles and has left him unable to walk, talk, or eat. He was one of three cases his doctor had seen, and he was the worst.

“His doctor said, ‘He’s not going to make it to 18. There are two cases who made it, but your son’s case is more severe. There’s no treatment or medicine. I’m sorry. Just take him home and love him,’ ” Riojas said. “I believe I overdosed him with love.”

During his hospitalization, Riojas realized she had a passion for helping people. She would help nurses communicate with Spanish-speaking patients, which inspired her to apply to Medical Assistant school. Her journey through school is what led her to JPS Health Network.

“I am grateful for my position at JPS because I was going through a hardship,” Riojas said. “I had just finished Medical Assistant school, and they gave me a chance to get back on my feet. I was working three jobs before I came to JPS, and after I got the job, things started to get better.”

Riojas has served the JPS community for 21 years, and her experience has prepared her to provide the best care to patients - including her ability to communicate with the Spanish-speaking population in her role.

“It gives me great pleasure to know that I give the JPS population some security, while also giving them a great experience.”

Riojas said the more she cared for patients, the deeper she fell in love with patient care, and the experience helped her begin to heal.

“I enjoy helping and caring for patients, because it helps heal them,” Riojas said. “Patients come here who have been diagnosed with cancer or they’ve had a miscarriage. You learn that everyone is going through different situations. Hearing their stories helps me, and they don’t even know it. I always listen because that’s what helped me.”

Riojas speaks highly of her coworkers who have also played a role in her road to healing. On her sons 18th birthday, they all joined in on the celebration.

“They said he wasn’t going to live past 18, so I wanted it to be super special,” Riojas said. “It was a Hollywood-themed party, and my coworkers, nurses, and the director at the time dressed up and celebrated with us.”

Riojas’ son is now 31, and she believes outside of her husband’s support, working at JPS allowed her to care for her son without worry, which made it easier for her to overdose him with the love and care he needed.

“I am thankful for JPS because they gave me a chance. My coworkers will never understand how much they helped by listening to me talk about the love I have for my son,” Riojas said.